This post contains Amazon affiliate links, which means I make a small commission at not extra cost to you. See my full disclosure here.

As a homeschool momma to a very tactile learner, I knew right away that hands on manipulative’s were going to be a must have for my Kindergarten son in math this year! With so many options on the market, I wanted to be intentional with what I purchased. I went searching for options that would be multi-functional and relatively easy to store in the homeschool room. I have narrowed down my list to the top five math manipulative’s that have been most beneficial in our school this year!

What are Math Manipulative’s & Why Might Your Kindergarten Learner Benefit From Them?

Before we get into my top five picks for kindergarten math manipulative’s you need in your homeschool, I want to discuss why I think your learner could benefit from them. Just as no two snowflakes are the same, no two learners are the same either. There are multiple styles of learning which means some students may require different accommodations. My son is a tactile/ kinesthetic learner. A tactile learner benifits when using their hands and by physically touching manipulative’s to drive home the concepts being taught. Using math manipulative’s this year has been such a help! They have helped with my sons engagement, he is able to better retain the information being taught , and he is actively enjoying learning his math concepts!

The following are my picks for the top 5 must have kindergarten math manipulative’s for your homeschool:

A “counter” is a physical tool that represents a numerical digit and can assist your student in counting. The student can visually see the amount that a number represents. The good thing about counters is that you can literally use anything! You could use a snack you have on hand, such as cheerios, goldfish, or candy. There are also multiple counters on the market you can purchase. One of our favorites that we use daily are counting bears. They come in multiple colors, two different sizes, and come with a mama/papa/baby bear. Counters are great because not only do they help with counting, but they can also take your student up into addition, subtraction, multiplication, and so on. So, if you do purchase a “counter” set, you will get several years of use out of them.

Base Ten Blocks are a math manipulative used by students to learn basic math concepts. These concepts include counting, addition, subtraction, number sense, and place value. Once again, this is a tool that can be used not only in the Kindergarten year, but for several years after that. We have used these the most this year when studying place value. For example, I will give my son a number, and he will show me the physical number with the ten sticks and ones cubes. By doing this, it helps him see what the number looks like and understand its place value.

Who remembers the large, bright yellow, “Judy” clock from their elementary school days? I have such vivid memories of using one in the classroom when I was learning how to tell time! As soon as I saw that “telling time” was on the curriculum map for Kindergarten, I ordered one of these clocks right away. My son was just as thrilled as I hoped he would be when we started using it during our Math time. It is large, so each number is visible and easy to distinguish. The hour/minute hands work together to move around each number. There is also a knob from each hand for the student to easily hold on to. It is very sturdy as well, which was a must have for me! He actually begs to “practice” with the clock, even when telling time is not on the schedule for that day.

A number line is not something I usually see when I research what other people supplement with during their math homeschool time. However, it has been a daily “manipulative” we use in our homeschool. You could easily make your own, but I found a dry erase version that we use almost every day! We use it for counting practice, for solving the “number before” or “number after,” and we also use it for addition practice. It has been an excellent tool that has served multiple purposes.

I have been saving the best manipulative (in my opinion) for last, the linking cubes! They are by far the most used manipulative in our homeschool room. The set we use is multi-colored, which is very appealing to my boys! We use them for counting, addition, subtraction, color sorting, less than/greater than, and even as a free time building activity! My two-year-old uses them to build, while my kindergartener uses them for Math skills. They check both the multi-functional box, as well as being easy to store and pull out to use during school time. I think every learner could use these in some way or another!

What are your must have math manipulative’s you use in your homeschool?

I hope this has been helpful and that you find success in using these math manipulative’s in your classroom. I would love to hear from you in the comments on what your must have’s are! 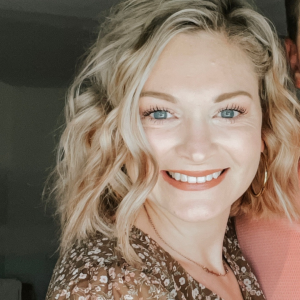 I am a stay at home momma to two sons, Graham + Beckett. We spend our days hanging on the farm! I have a passion for home education, gardening, caring for our backyard chickens, and thrifting!

Read more about me HERE!